Just like many Go developers out there, I’m a big fan of Go standard library. Over the past few years I’ve been hacking on Go, I’ve discovered some real gems that not only made my life as a developer easier (no need to maintain unnecessary code), but they also made my code considerably more readable for others to follow. The last time I blogged I talked about how you can leverage Go standard library to generate weighted random draws.

Today I want to talk about a simple (i.e. not extremely efficient or optimised) implementation of the Breadth-first search (BFS) algorithm using just Go standard library along with some nifty tricks I’ve picked up over the past few years. I won’t discuss the BFS algorithm at length here. There is plenty of material available online. Intead, this post will show a practical implementation of BFS and demonstrate its correctness on a simple example. Let’s crack on!

BFS is a reasonably well known algorithm used for traversing or searching graphs. Among many other applications it’s used in Garbage Collectors for prutning the trees of no longer referenced memory or for finding the shortest path between two nodes in a graph. This post will describe how to use BFS to traverse all the nodes in graph.

This is handy in situation such as one I faced recently at my day job at Micro where I had to generate a topology of a local microservices network. As I’ll show here, the Go standard library makes this task quite easy.

Before we move on to discuss the algorithm, it’s worth pointing out that this post will describe the non-recursive variant of BFS. Usually, the most efficient graph traversing algorithms use recursion to walk the nodes of the graph, but for this particular task the non-recursive alternative is resonably efficient and performant, so we’ll stick with it.

The pseudocode for the non-recursive variant of BFS is pretty simple. But before we get to it, but before we spell it out it’s worth mentioning a few things.

Firstly, when traversing a graph, BFS splits the graph nodes into two groups:

By doing this we skip the nodes which have already been visited, thus avoiding cycles leading to infinite loops.

Secondly, the algorithm uses FIFO queue for storing the graph nodes that have yet to be visited. Both of these points will hopefully become more clear as we walk through the actual implementation.

Let’s have a quick look at the BFS pseudocode now. It goes something like this:

Implementing FIFO queue in Go is pretty straightforward if we decide to do the hard work ourselves. For the purpose of BFS we would need a data structure that will implement the following two methods:

One very naive way to implement this could look something like this:

If you run the above program in Go playground, you’ll notice the values we push to the back of the queue are “popped” out from it in the same order they are pushed onto it just as we would expect from the FIFO queue:

Experienced Go programmers will notice a multitude of issues with this implementation (that’s why I called it naive right at the beginning). The most important issue is a major memory leak. If you are familiar with Go slice semantics you’d know that by appending to the internal queue slice (like we do in th Push method) we can potentially grow the program memory until we run out of it and the program crashes. In fact, that would have been a better case: we could potentially even crash the Operating System on which the program runs. Ooops!

Furthermore, even if we had infinite amount of memory, the performance of this implementation is horrenduously bad when used on large scale problems as Go append could be continuously allocating, reallocating and copying the memory here and there as nicely described here. Not good! On a more positive note, though, if we know the queue can not grow above some small threshold this implementation might do an OK job.

As I said at the beginning this post is about implementing BFS by taking advantage of the Go standard library. Unbeknownst (this must be the first time I’ve used this word!) to many, Go standard library has a little gem of a package which provides an efficient implemention of the queue we need: container/list. Actually, container/list implements a doubly linked list, but we can (ab)use it as a FIFO queue by only using its PushBack() and Front() methods which provide just enough functionality for what we need from FIFO queue! Few lines of code says a thousand words so here is a small code snippet that demonstrates this quite nicely:

Again, if you run this program in Go playground, you can verify the FIFO works as expected:

Now that we have the FIFO queue off our necks we can move on to the actual BFS implementation. Spoiler alert: the queue part may have been the most interesting part of this blog post, but bear with me if you are curious how this mystery works out!

Let’s define a simple graph data structure. This will by no means be the best way to model the problem, but it will serve us well in this blog post. Every graph has at least one node which can have some neighbours (or it can have none) – let’s call these neighbours “friends”. We can model a simple graph node as follows:

NOTE: for simplicity we will use Go maps to track the node's neighbours.

Let’s build a simple unidirected graph which has multiple nodes in it. Unidirected graphs can have cycles, and for this particular example we actually want the graph to have cycles so that we can demonstratethe the correctness of our BFS implementation when traversing the graph. We can build a 4 nodes graph like this:

The graph we had so laboriously built above looks something like this: 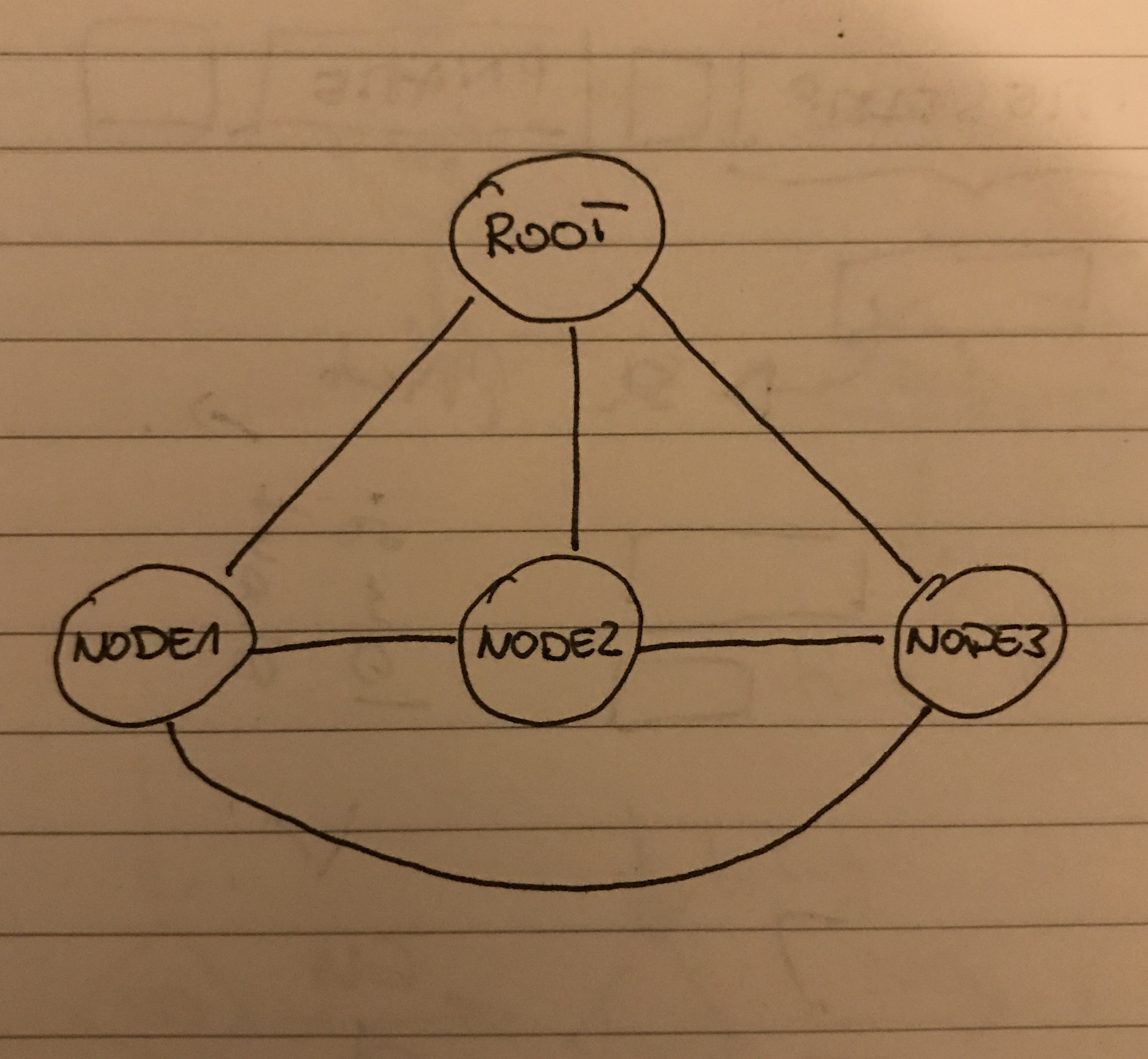 (Why, yes! That’s an image scribbled on my notepad taken by my phone)

Our goal now is to visit all the nodes in the graph (traverse the graph) and collect them into slice. Given the pseudocode of the BFS algorithm we had discussed earlier and taking the advantage of the container/list package we can write the whole algorithm in a few lines of code as follows:

That’s it! That’s the whole implementation! It only takes something about 15 lines of code (excluding the comments). Beautiful! Once the algorithm is finishes running the visited map will contain all the nodes in the graph. No less, no more!

We can easily verify the implementation works as expected by putting all the pieces together in a simple program:

By running the above program in Go playground we can verify it has correctly collected all the nodes present in the graph.

This blog post has once again demonstrated the power of Go standard library. We’ve walked from a simple and inefficient implementation of FIFO queue, to the one which took advantage of the features provided by container/list package. We’ve then used it in the full BFS implementation in only on a few lines of Go code. Magic!

By taking advantage of the wealthe of packages provided by Go standard library we can save ourselves a lot of time that can easily be sunk into maintaining unnecessary source code and focus on the more important things in our business logic. One another advantage of using just Go standard library is we can easily share the fully executable programs by sharing Go playground links since we do not need any external dependencies. This can be a major win when colaboratin on debugging program behaviour.

Keep on hacking, Gopher friends! Until next time!